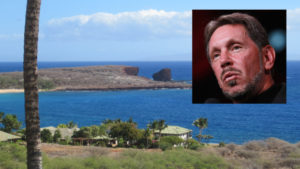 You may remember a few months ago that there was a big purchase made here in Hawaii. In fact, when Larry Ellison – the CEO of Oracle, bought Lanai, it was one if the biggest Real Estate purchases in history. While many of us wait to see what will happen to Lanai, recent news has surfaced that Ellison does indeed have big plans for Lanai.

There was a meeting earlier this week that gave local residents a layout of what they could expect to see happen for Lanai. With all tat was put out there, I don’t know how this won’t make Lanai a more popular place to visit.

Here is some of what was laid out as part of the future of Lanai at the meeting by Ellison’s people:

But that isn’t all. Reports show that Ellison is also interested in buying local airline Island Air, which both Island Air and Ellison himself have declined to confirm or deny at this time.

While the meetings did give residents a look at what would eventually be happening, they did not receive any timelines. Therefore, these changes could literally take several years to implement.

“Overall the community is I think excited and optimistic about the potential,” said Butch Gima, a social worker and president of Lanai­ans for Sensible Growth. “There are really no red flags at this point.”

Ron McOmber, a longtime Lanai resident who clashed with Castle & Cooke’s billionaire owner, David Murdock, said it is a bit scary knowing how much money Ellison has at his discretion to execute his plans. But the plan itself is enlightening in a good way to McOmber

“I think it was very positive,” he said.

Ellison, co-founder and CEO of business-software giant Oracle Corp., is the third-richest man in America with a net worth Forbes pegs at $41 billion.

With so much wealth, McOmber and others figure money will be no object for Ellison.

But doing what’s right for the community also is an aim for Ellison, who has created about 100 new jobs largely through hotel improvements, and reopened a community pool that Castle & Cooke shuttered.

This should be very good for Lanai, as the island needs to sustain some sort of growth to allow it to flourish more. Plus, bringing tons of jobs in is never a bad idea. We will see how this all unfolds.