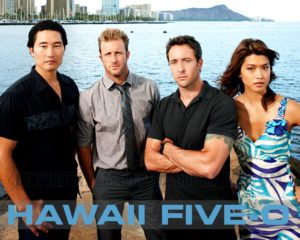 It seems that even the unstoppable force that is Hawaii Five-0 sometimes crosses a boundary and is forced to apologize when they misstep. The producers of Hawaii Five-0 released an apology to a group of 24 Pearl Harbor survivors that it may have offended when the two entities crossed paths Friday at the National Memorial Cemetery of the Pacific at Punchbowl.

Punchbowl officials have acknowledged that while both “Five-0” and the veterans group — the Greatest Generations Foundation — were scheduled to use the cemetery in separate areas, their paths did cross. Steffan Tubbs, a board member of the veterans group, claimed that the veterans were rushed along by the Hawaii Five-0 production crew.

Tubbs, a co-host of a Denver morning radio program, also said that Hawaii Five-0 did not stop production during the national anthem and taps, concluding that the actions of everyone involved in the Hawaii Five-0 shoot were “disgraceful.”

I actually have to agree here, who doesn’t stop for veterans, especially when something like this is going on?

In his statement, Lenkov said the show halted production and waited for the ceremony to finish before resuming. So I guess we have a “he said, he said” kind of situation.

“When we resumed filming, we did encounter visitors from the ceremony,” Lenkov said. “Any rudeness by our staff can only be attributed to haste to finish our work, not a lack of respect for men and women who have served and sacrificed for their country. And for that, too, we sincerely apologize to any that were offended.”

At least the people behind Hawaii Five-0 were quick to make an apology, showing that they know it is a huge privilege to be able to film here in the islands.

“We recognize the privilege of filming in Hawaii and we are acutely aware of the deserved respect for its culture, history and the reverence that should be afforded to all of our veterans, particularly those who served so nobly in Hawaii and at Pearl Harbor,” Lenkov said in an emailed statement.

Hawaii Five-0 has actually proven they respect and care for our veterans in the past, so lets hope this was just a small misstep.

Hopefully the Five-0 people will learn from this a little. For the most part it has been smooth sailing for the cast and crew of Hawaii Five-0 here in Hawaii. However, some bumps in the road are bound to happen, lets just hope everyone learn from this.