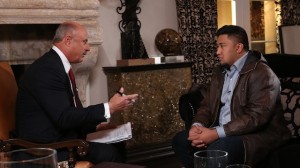 Okay, I have done my best to stay away from the Manti Te’o Hoax situation, and while the story may be nearing its conclusion, there are still plenty of questions surrounding the situation. In an interview with Dr. Phil, which will air Thursday and Friday, Ronaiah Tuiasosopo, who is said to be behind the Te’o hoax that lasted several years, admitted in the interview with Dr. Phil that he fell “deeply, romantically in love” with Te’o over the course of the scam. We have posted some video from the interview below.

“I asked him, straight up, was this a romantic relationship with you?” Dr. Phil McGraw said on NBC’s Today. “And he says, ‘yes.’ I then said, are you then, therefore, gay? He says, ‘Well, when you put it that way, yes.’ And then, he caught himself and said, ‘I am confused.'”

This story is one of the most bizarre, if not the most bizarre stories, to come out in a long time. While people remained skeptical and confused as to what led up to all of this and whether or not Te’o was part of the scam, Tuiasosopo emphatically denied that Te’o was in any way involved with the scam.

He noted that while Te’o and “Lennay Kekua” (the girl in the scam that never existed) would “break up,” Tuiasosopo himself would find a way to reunite them:

“There were many times where Manti and Lennay had broken up, but something would bring them back together, whether it was something going on in his life or in Lennay’s life, in this case in my life.”

Tuiasosopo still contends that it’s his voice on the famous voicemail recordings, not a cousin. That may be the only mystery still left in this story, one that has now finally started to come to an end.

We will see if anything else comes out of this story, you never know what could break over time. However, as of right now, this just simply remains one of the weirdest stories to ever hit the news wire.

Hopefully we can all start to move on from the Manti Te’o / Lennay Kekua catfish scam, but it seems everyone involved will try to get their 15 minutes of fame.